After six months of very hard work the race that everyone (well just me) was calling THE BIG ONE had finally arrived. I arrived at the ExCel centre at about 10am on Sunday knowing that my destiny was fast approaching. I was ready to do battle and I had racked my bike on the Saturday so I knew that my steed would already be in position in the transition area.

I was feeling pretty relaxed about it all but there was always a nagging doubt in my mind that something could go wrong. There are so many variables in triathlon that I think it’s probably only natural to think like that. The thought of me not finishing and having to wait a whole year to put things right as it were, didn’t bear thinking about. Despite the doubts I was feeling so positive that my infantile grin made me look like a Spitting Image puppet of Tony Blair. I knew I was in pretty decent shape and should be able to go the distance. 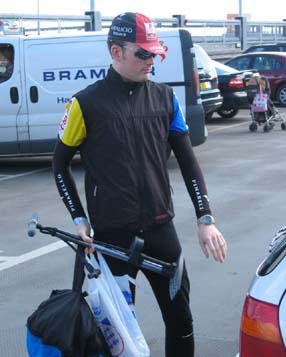 After the debacle at Blenheim Triathlon earlier in the year there was no way that I was going to mess up the course again. I didn’t want to get a reputation as the Homer Simpson of triathlon so I attended the very handy course briefing which gave very detailed, simple instructions that even I could grasp.

After this I set off for the transition area. To my surprise it was closed as they were letting the elite professional athletes pass through transition without the peasant age-groupers like myself getting in their way. I think the organisers could have worked this a lot better and in the end it meant hundreds of us standing there waiting for a few professionals. Eventually I got in but I had less that thirty minutes before my start time which was not ideal. 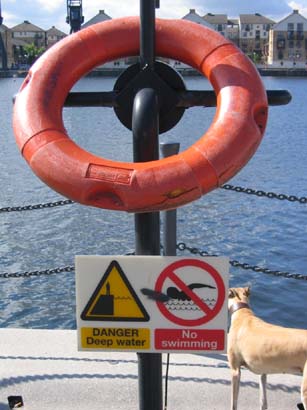 Twenty minutes before the off I lined up in the swim assembly area with the other 334 crazy people. It was a mixed band of first timers like myself and quite a few who were obviously more seasoned. I wasn’t feeling nervous but I knew that the next few hours were probably going to be reasonably tough. 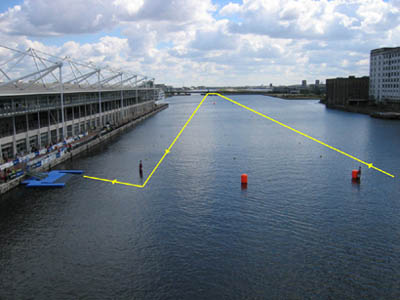 Having dived into the water I swam to the far side of the start line. The course was a simple out and back, anti-clockwise affair so the theory was that the faster guys would go for the inside so they could get to the turn first at around half distance. I would be well out of the way and unlikely to suffer a repeat of the pounding I took from some hairy foot slowcoaches at Blenheim. I wasn’t too worried about any rough stuff this time as I had been working hard at Hampstead Heath Pond with my coach on swimming in open water. This time I was going to give as good as I got. 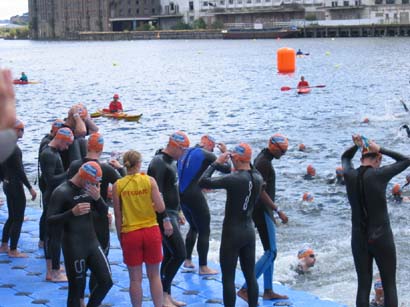 The hooter sounded and we were off. I was the furthest on the outside of all the 335 guys in my wave and so I avoided any other swimmers as they all set off like the clappers and immediately went for the inside of the course. I was absolutely left for dead at the start. I had been practicing my 1500m in the pool and was regularly clocking in at around the 35 minute mark. As I saw the majority of the field disappear into the sunset I was actually very relaxed. I was sure they had gone off too quickly and I would start to catch them up when I made the turn at 750m. In any event I was sure if I stuck to my pace I would do the swim in around 35 minutes which I would have been very happy with. 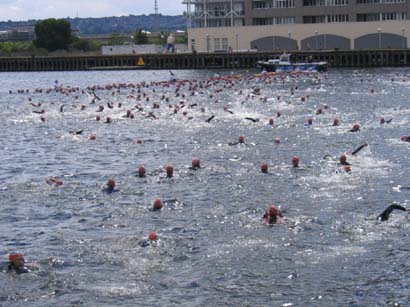 I realise now that 1500m is actually quite a long way. It seemed to go on forever. When I was treading water at the start I remember thinking that that I couldn’t see the half distance buoy where we turn to come back towards Excel – it was that far away. Eventually I got there and started to swim back towards Excel I felt pretty comfortable so I decided I would try and up the pace. Try as I might though the arms and legs refused to move any quicker than the steady pace they had been knocking out for the first half of the swim. The majority of the swim field still seemed miles ahead so my rather smug little plan looked like it could be up the creek. 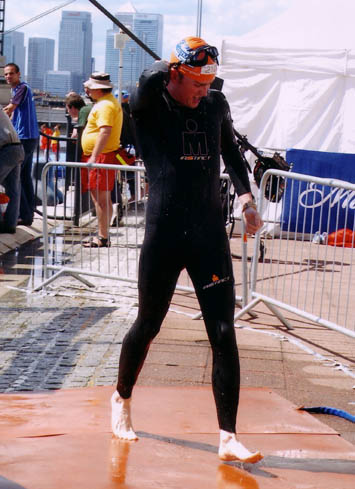 Eventually I stumbled out of the water and looking at my watch, I could see I had pulled of a rather uninspiring 46 minutes for 1500m. Obviously I was tired but I wasn’t in tatters like I could have been which suggests to me that my technique can’t be all that bad. I was fit, my technique was OK, but I just wasn’t fast. Two out of three isn’t bad. That swim coaching paid of!

I had a bit of a problem with my wetsuit zip as the zip cord got tangled up in my collar. I had my race gear underneath and it then started to occur to me that I had never got it wet before and that I could be about to have a rather embarrassing see-thru lycra moment in front of my friends, family and BBC TV cameras. As the wetsuit came off I looked down at my nipples and saw that they were not obviously visible and my modesty was safe. 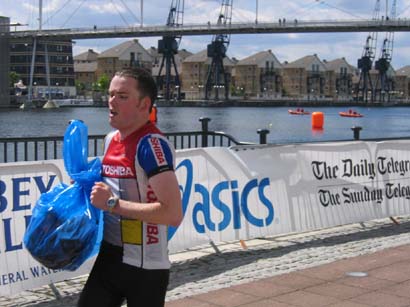 After bagging up my wetsuit I ran up the steps towards the transition area. I passed a couple of chaps who looked absolutely spent already and they still had two disciplines to go! On the way to my rack position I hit a wet patch and fell very hard onto my buttocks with TV cameras and several spectators looking on. I fell backwards and knocked my head (only very slightly) but all I was worried about was looking like a total plonker! Fortunately nobody I knew saw it and the BBC did the honourable thing and didn’t edit it into the highlights.

I was quickly off on the bike course feeling slightly disorientated from having my head in pitch dark water and the comedy tumble. The first 20km lap of the bike course was easily the hardest part of the race. The course was very flat and fast and I was was concerned about how hard I was finding it. I couldn’t get comfortable on the bike and couldn’t find any rhythm. I had a crashing headache and I wasn’t sure if it was dehydration or from the fall but I kept sipping my drinks as I didn’t want to be desperate for the toilet later on. I was particularly thinking of the run as running puts a lot of pressure on your bladder and I was not in the mood for doing a Paula Ratcliffe in front of several thousand spectators. 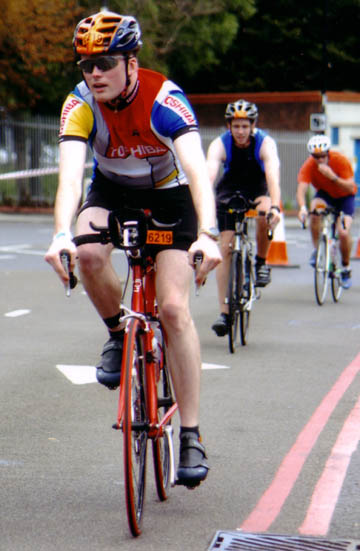 I’ve never been a talented cyclist but it was probably my strongest of the three disciplines before I started training for this event. Unfortunately, due to my relative weakness in swimming and running the cycling took a bit of a back seat and now I was paying the price for it.

By the second lap I was feeling better and the headache had disappeared. I felt OK but my legs were calling the shots now and I had to carry on at the pace they set as they had made it clear that going faster was not part of the plan. I passed several friends and family on the bike course but didn’t have time to wave or stop and have a chat – sorry! 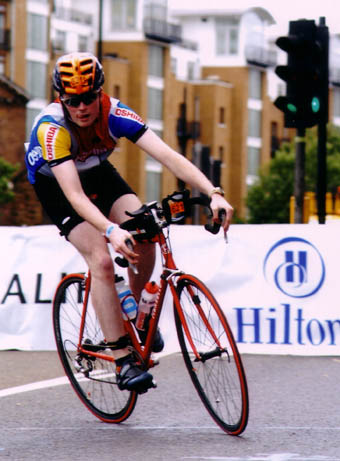 I arrived back at the transition area for the second time feeling much better than I had first time around especially as I managed to avoid falling over. The running shoes were slipped on and I was quickly into part three of this sporting trilogy. As part of my training I had done quite a few brick sessions which involves cycling and then running immediately afterwards. This prepares you body for the shock of changing discipline as when you start running your legs want to cycle and you can often look like you have a bad case of rickets. These sessions really paid off and I was quickly into my rhythm. 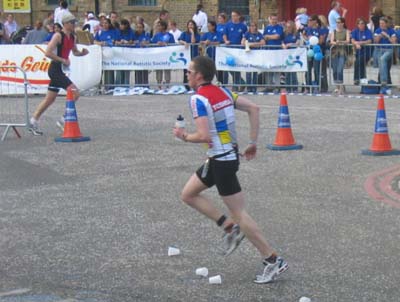 I was running fairly comfortably but every time I tried to go faster my legs wouldn’t respond. I’d love to tell you that I threw the kitchen sink in at this point and started to perform heroics but sadly, it had already sunk to the bottom of the Royal Victoria Dock. 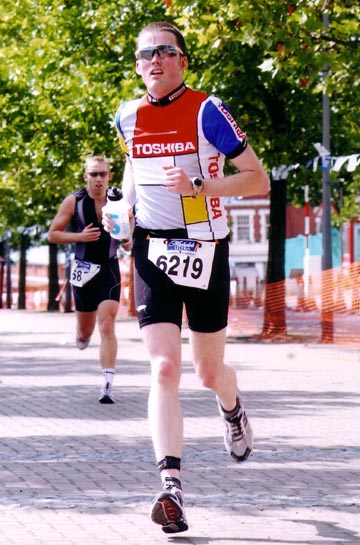 One of my fellow competitors  was dressed as Batman and I later discovered that he had completed Ironman Lanzarote (2.4 mile sea swim, 112 mile bike and 26 mile run) in the same outfit! Clutching his charity collection tin, Batman showed me a clean pair of heels and even had time to stop and collect donations from spectators before I caught him up! 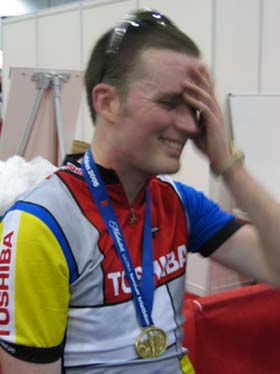 Three hours and sixteen minutes (and several months of training) later, I crossed the finish line. The finish line was actually indoors which made the whole experience more surreal. It was great to see so many familiar faces as I showed off my medal.

My first feeling was of disappointment as I really wanted to try and get under three hours. I was already telling anyone who would listen that I planned to be back in 2006 in my best ever shape as I had “unfinished business”. I wasn’t to upset though as my main aim was just to complete the race and anything on top of that was a bonus.

The whole thing took a couple of days to sink in. In six months I had gone from being a non swimming, beer swilling sloth to completing a 1500m open water swim and an Olympic distance triathlon. I think I am quite right to feel proud of this achievement. 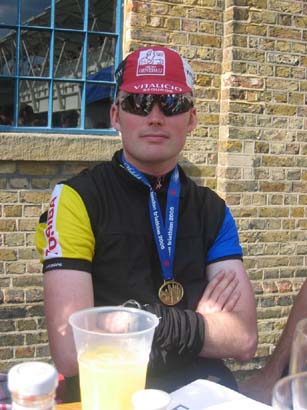 Thanks:
Special thanks to Dawn and Tom for the logistical support.
Thanks to the cheer squad: Mum, Maria, Sean, David, Jen, Sharon, Diane, Laurence, Jess, Nasmin, Bruce, Barry, Ros, Tim and Charlie.