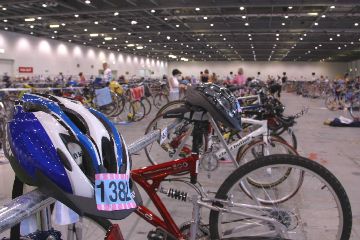 It’s always a lot harder the second time around. Last year I had all the motivation I needed as I couldn’t swim and I was so out of shape that I made Bernard Manning look like Bernard Hinualt. Having pulled off what for most of the time last year had seemed highly improbable, it was going to be harder to motivate myself this time around. I now had previous and any worries about not being able to finish were gone – it was all a question of going faster.

On the day things didn’t start all that well with my whole swim wave being pulled out of the water for a problem on the bike course. Luckily we were underway within 10 minutes so. There were a lot of people taking part in their first triathlon I was happy to pass on the benefit of my comparative experience (this was my fifth triathlon) to a few nervous chaps as we waited. Unfortunately, most of the newbies left me for dead on the swim as I am still really slow, and I can’t use being a first timer as an excuse any more! 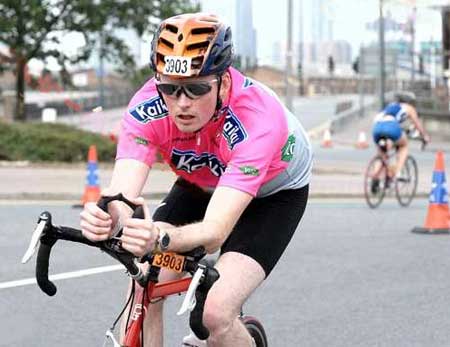 I knew I was slow but I wasn’t feeling like my arms were made of lead or that I was about to become reacquainted with my breakfast at any second, like last year. Towards the end the wave behind me started to overtake and I was thrown about a bit but held on. I improved my swim time by two minutes which I’ve got to be happy with seeing as 18 months previous to this race I couldn’t swim fifty metres. My swimming is still a massive problem though as I’m losing between 10 and 15 minutes to the majority of the field. It will take time to make the big leaps forward that I need but the problem needs to be seriously addressed if I’m going to improve overall.

Having chugged through transition I was off on my bike. I was really upset with my bike time last year as I ride a bike every day and cycling is something which I am passionate about. Remembering 2005 my race strategy was simple. Survive the swim, go as hard as possible on the bike and then hopefully keep it going on the run. As most people spend the majority of the race on the bike I had put in more work this time around. I felt strong and was going quite well and I even turned my bike computer off as I have a tendency to focus on how fast I’m going and ease off a bit if I think I’m going to overcook it. 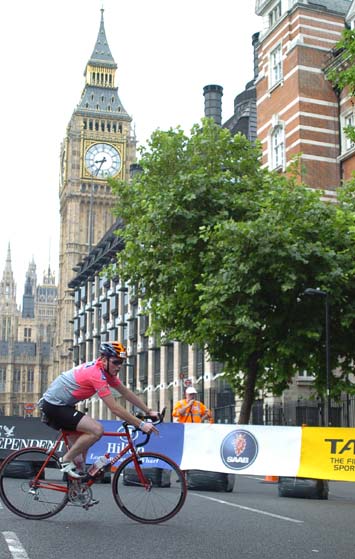 With 15km to go I worked out that if I rode on or around my limit, there was a good chance I could leave myself 50 minutes for the 10km run. I was confident I could run faster than that if I had to but I couldn’t afford to leave anything to chance. I went as hard as I could and I kept trying to shift into a bigger, faster gear that wasn’t there. I was shouting people to move out of the way and I don’t think I endeared myself to a couple of people I came very close to at top speed.

It all looked good until I got back to transition and a mad panicked rush to find my missing spot on the bike rack ensued. It’s not a pretty site to see a very tired looking man in pink lycra running around shouting for help from nobody in particular. Eventually I found it but not before I thought I was going to cry with frustration and plead with a marshall to help me. I lost a huge amount of time due to this foolishness and next time I need to work more on transitions as I lost a lot more time than last year on both the transitions this time around.

I started the run with heavy legs from the big cycling effort and I knew that the next 10km were going to be far from easy. I was suffering badly and was struggling to maintain a relatively slow pace. My stomach went as tight as a drum and I thought any manner of substances could come flying out of any orifice at any point, or that I might even spontaneously combust (although I’m not sure which would be worse). Pondering this rather delightful dilemma took my mind off the pain and I was busy checking my watch and doing all sorts of amateur mathematics in my head to work out if I was going to make it under the magic figure of three hours. 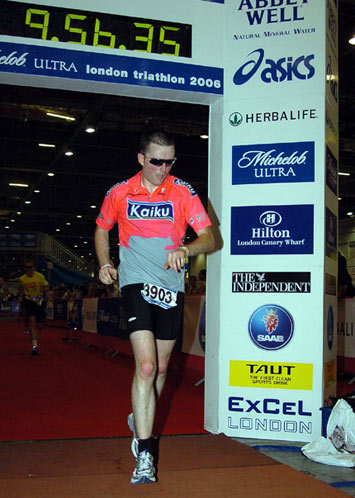 Finally I crossed the finish line in 02:57:37 taking me comfortably under my target. This was the first triathlon I had ever done where I felt satisfied with my performance. To have improved by nearly 19 minutes from last year is a huge result. I’m certain I can still make big improvements although I feel I need to focus on swimming as I am losing so much time before I even get on the bike. People questioned some of my methods (multiple races in a short space of time, chicken chasing and some of my other unorthodox training practices) this year but I got the result so I guess it proves I was right all along, which gives me an excellent feeling of smugness to be honest.