I had a bit of a freak out about the marathon last week and it suddenly dawned on me that 26.6miles is a frighteningly long way to have to run. I have been a bit cavalier of late so now I’ve decided to start psyching myself up for the last couple of months.

When I used to train for triathlons I always used to put together a playlist of some awesome power ballads which I would use to get that extra 5% effort I needed. Amongst my favourites were Eye of the Tiger (of course), The Touch, The Final Countdown and Jump by Van Halen.

Inspired by a top 10 list I found on Youtube I thought I would put together a similar list of macho bad ass training montages from the 80s. Nobody does montages like they did in the 80s (sadly).

5. Bloodsport – Van Damme needs pan pipes to get in the mood for the big fight 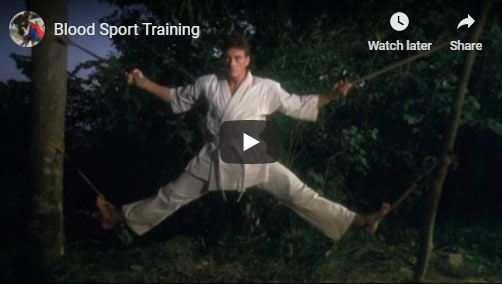 It was a tough one to choose between this and Kickboxer for my favourite Jean Claude training scene but this has to get the nod. It has a pan pipe soundtrack, silly side parting for JCVD and a mad bit where he makes tea whilst blindfolded. If he got a scolded thigh his martial arts skills wouldn’t be much good to him now would they? 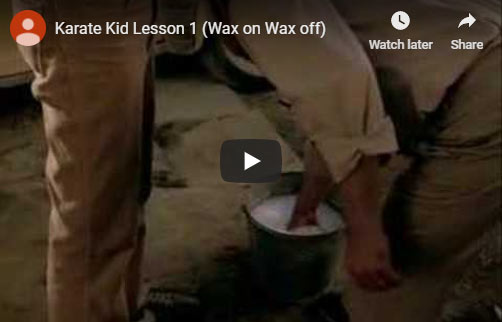 I never knew a spot of DIY could make you such a killing machine. I’ve got to clean the bathroom later but I’ll watch this first to get me in the mood. I can picture Mr. Myagi saying “Bleach the rim”. 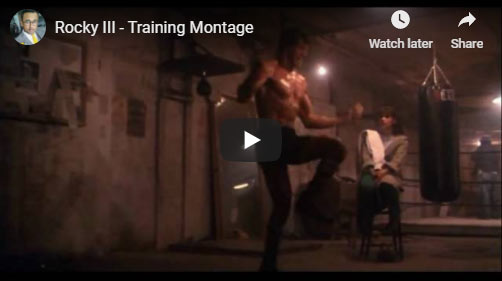 This has got to go in purely for the hilarious crop tops and tiny shorts. It’s the usual thing where Rocky is pretty rubbish and needs a bit of a kick up the backside, this time courtesy of Apollo Creed. I really liked the way he wiped the sweat off his face in this sequence before he kisses Mrs. Rocky. That showed real class.

2. Rocky 4 – Rocky gets back to basics in Siberia 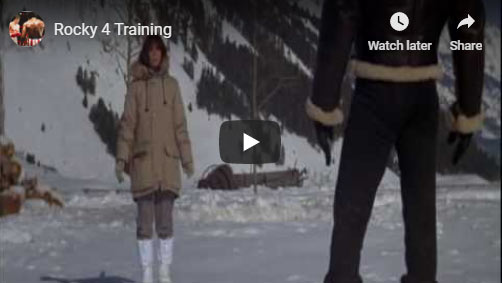 This is proper hard man stuff. The communists have all the technology but all Rocky needs is a log cabin in Siberia with an anvil and a sack of coal in the shed. It just goes to show you don’t need a fancy gym membership to get into shape. I’m a member at the local council gym which is pretty basic but I always think of this clip and it convinces me that upgrading to a fancier place is likely to make me go soft. 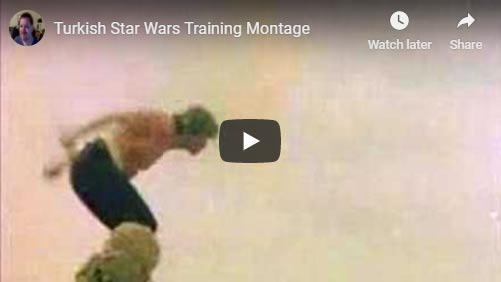 Dünyayi Kurtaran Adam (The Man Who Saves the World) is also known as Turkish Star Wars mainly due to the way it borrows (nicks) scenes from Star Wars and a host of other Hollywood films and throws them together with some hilarious overacting, bizarre special effects and an even weirder script. I must confess I have watched the whole film and loved every minute of it. Maybe not every minute.

This training sequence is just immense. There is punching of rocks, exploding boulders, flying kicks, back flips, the list goes on. Even the bit when the lady rubs salad on his bloody hands while giving him a suggestive look is just brilliant. I’m off to find some rocks to tie to my ankles.