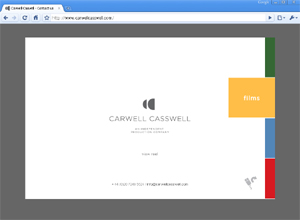 Recently I was approached by Carwell Casswell a London based film production company, who were looking to develop a new website. Being film makers they had a pretty good idea of what they wanted visually so my role was to turn their mockups into a working website. Their business is producing high quality films including documentaries, music promos, corporate films and their own selection of shorts. They wanted a simple, smart website which wasn’t too content heavy as they didn’t want to detract from their business – the films.

I must admit it was refreshing to work with creative people who are not from a web background. The white postcard layout with a right aligned vertical menu are not things which would have occurred to me but it does lend a fairly unique feel to the site which otherwise might have been lost with something more conventional. The other plus side was that with limited space available on each page it kept the content simple.

Building the website was fairly simple as I didn’t have to work through a number of visual ideas for them to pick from. This sped things up. The menu was the main tricky part as they wanted a really smooth animated effect and I felt that Flash should not be used as there would be nothing worse than some users without the correct plug-in being unable to navigate the site. In the end I used a jQuery effect called easing.

Making the jQuery compatible with all browsers was not all plain sailing especially Internet Explorer 6. Although IE6 is a bit of a dinosaur there are still many people in large organisations using Windows XP where it comes as the default browser, so it can’t be ignored just yet. The menu didn’t work at first in IE6 but I’m very grateful to Karl Swedberg for pointing out a stray comma (which shouldn’t have made any difference I might add) in my code which launched it into life.

I also advised them that the films themselves should be stored on a third party video site (they chose Vimeo) rather than hosting the videos on the site itself. They wanted to offer HD quality and if they hosted themselves they might have problems with users not having the correct plug-in or the video taking an age to buffer. The Vimeo server is going to be faster than their own (and save them precious bandwidth) and there is also the added benefit of having the films on Vimeo itself where more people can see and enjoy them.

You can see a documentary Carwell Casswell made with the Nairobi Orphan Project above outlining the predicament orphans face in the Kibera slums, Nairobi.