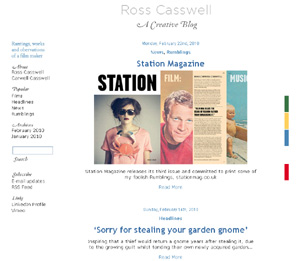 Earlier in the year I worked on a website for an independent film production company called Carwell Casswell. The company founder Ross Casswell asked me to help him rework his own personal site as well.

Ross had a clear idea that he wanted the site to be a blog where he could talk about his film work in more detail with behind the scenes stuff to give a bit more background for people interested in the company’s films. He also wanted the blog to be a creative outlet (hence the name – A Creative Blog) for some of his writing or rumblings as he calls them. He also comments on amusing headlines he sees in the media from time to time.

To create the theme I used the White as Milk theme by Azeem Azeez as the basis. I had to tweak quite a lot styles and positioning to make it closer to what Ross wanted it to look like – you can see this easily enough by comparing the two themes. If want to compare the code Firefox users can see the differences by using the firebug plugin or if you use chrome you can check the CSS through the Web inspector panel (right click on something and then choose ‘inspect element’). Both tools came in very handy on this project!