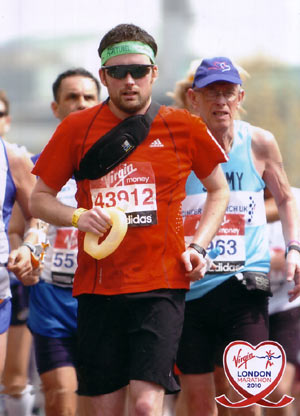 I’ve been a bit busy of late so I thought I would quickly write up a few notes about the London Marathon which I ran on 25th April. If you’ve been following my journey you will know I was all signed up to do it last year and got injured and had to pull out. I came back again this year and despite some injury problems managed to finish it. I’ve written some thoughts below using the most common questions I’ve been asked by people.

What was the hardest bit?

Between 14 and 19 miles things started to get very difficult. The problems I had been having with various tendons kicked in which reduced my mobility considerably. That bit wasn’t fun but I got to Canary Wharf and took some pain killers (don’t try this at home kids) and suddenly I felt great.

I still don’t know what this means…so I guess no is the answer. The last few miles were like going over the top from a WWI film. All of a sudden someone in front of me would drop to the floor and I would swerve around them and keep going. There were a lot of people suffering at the end. 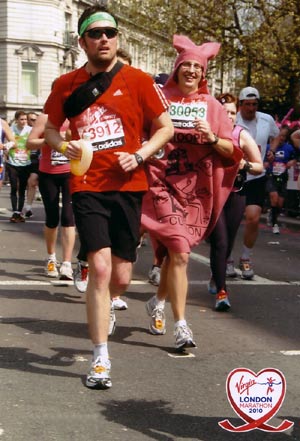 Are you happy with your time?

If you told me a year ago before all my injury woes that I would run 4:41 I would probably be a bit disappointed. But taking into account how difficult it has been to nurse myself through the training the last few months I’m very pleased. Then again I might have completely over estimated my ability in the first place – either way it was a good effort.

Would you do it again?

No disrespect to NSPCC who were fantastic on the day or any of the other charities but the fundraising is a lot harder than the running so I would have to think very seriously about that side as well as the training which is a pretty hard slog in itself. The atmosphere on the day was absolutely unbelievable. From the gates at Blackheath to the finish on The Mall the whole route was lined with people. There was lots of cheering and support and quite a few people crying which I thought was strange, but each to their own I guess!

What happened to the Forrest Gump costume?

Was it harder than doing a triathlon?

I would say the marathon training is much tougher on the body and 4-5 hours is a long time to be in pain but I would argue that the technical side of a triathlon (Olympic Distance at least to compare to a marathon) makes it more difficult for someone with no sporting background like me back in 2005. The marathon is more damaging but it’s pretty straight forward and there is no mass open water swim or transitions to worry about.

Did you see any celebrities?

Strangely, lots of people have asked me this. I did see Caprice watching by the side but that was it. I really wanted to overtake Gordon Ramsay and shout something rude and patronising to “encourage” him but he packed in half way round with some weak excuse. The famous people get their own start spot so they don’t have to mix with us plebs which I think is a pretty poor show.

Thanks a lot for everyone who supported me on the day and all those fantastic sponsorship people – I managed to make my £1800 target.