At the last minute I was persuaded to take part in the British 10k by the fundraising department of the charity I work for. I normally go to provide a bit of moral support to the other runners anyway so I thought I might as well give it the full go. The only problem was that I hadn’t really trained much since I ran the London Marathon in April. Although I’ve kept my fitness reasonably high I was worried I might end up looking a bit daft in front of my colleagues. 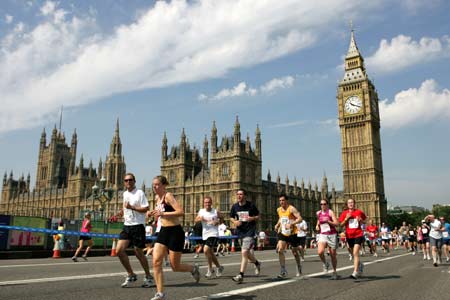 The event itself is huge and despite the ongoing spat the organisers have with London Marathon Ltd (make of it what you will) is one of the top fundraisers of the year and a great place to start for anyone wanting to try their first 10k.

I ran the 10k in 53 minutes. This is pretty poor by my standards as my previous slowest 10k was 50 minutes and that was at the end of an Olympic distance triathlon. I was probably on for 50 until I got to about 4km. The crowds were huge and it was pretty difficult to get past people and I’m not one for pushing people out the way so I just had to “sit in” for about 3km without being able to overtake much. My fitness wasn’t up to scratch and a few of the pains I had from the marathon are still there when I run so I think I need to give myself a really long time off before I think about any more running.