Even though I’m not running any marathons this year I ate quite a few pies over Christmas so I thought I would try the Action Duchenne “Love Run” like I did last year.

This time rather than being in Battersea Park on a rather dull loop it was relocated to Finsbury Park on an easily more interesting course which zigzagged around the duck lake and athletics track for 4 2.5km(ish) laps. 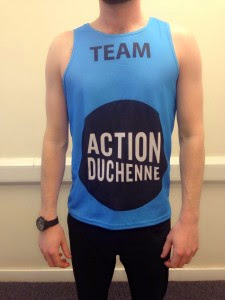 Action Duchenne is a really great cause, trying to raise money for young boys who have Duchenne Muscular Dystrophy. I would certainly say it’s worth making any sort of donation you can afford.

The event was really well organised. I even had one of those new fancy disposable timing chips stuck to my race number. My running wasn’t too bad either as I covered the 10k in 48:28, roughly the same as last year. This year I don’t plan to get injured so hopefully I can build on this as I’m planning some more 10k runs and I would really love to dip under 45 minutes at some stage in my life!