I signed up for the series of Rainforest Foundation UK 10k runs as it combined a decent cause (even if Sting is involved with the organisation) with a chance to practice my running before the Triathlon in August.

The first run was 4 Seasons West in Old Deer Park, Richmond. The event was pretty well organised and runners could even get a free massage at the end. There was also a “Zumba” warm-up at the start which wasn’t really my bag as it involved choreography and I’m about as coordinated as a snowstorm. 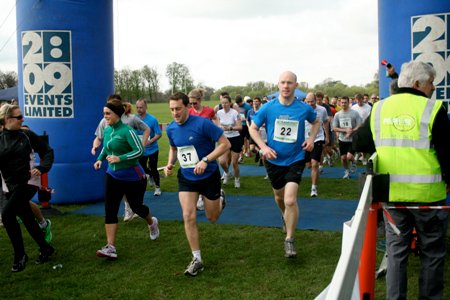 The 10k itself didn’t go too badly. I forgot to set my timer until 1km so as a result I was somewhat confused as to how I was doing overall but I ran the second kilometre in 4:30. I did seem to slow down considerably towards the end. I didn’t notice this at all but a friend running behind was catching me up. The course was an out and back affair alongside the Thames and I was running alone quite a lot and think I just switched off as I got a bit bored.

The series is called the 4 Seasons with a run in West, East, North and South London in each of the seasons of the year. The other events are:

(I can’t make this now but they have kindly allowed me to defer free of charge until 2012. British Gas Great Swim should take note of how a proper cancellation policy works).