When asked to create a really cheap website I’ve always plumped for something open source like WordPress or Drupal as a CMS. I was asked recently to put together a sustainable, fully custom themed website for a local music festival with no budget. I started to investigate Tumblr as a possibility.

I’ve always thought Tumblr was a bit of a fad and a half way house between traditional blogging platforms (WordPress, Blogger etc) and Twitter as many Tumblr blogs seem to be a splurge of images, video and animated Gifs with seemingly no order or point to them. I still kind of think that but maybe because I’m getting old and I’m not “down with the kids” anymore! Tumblr recently overtook the number of published WordPress.com blogs so it must be doing something right.

Tumblr offers a package of features which suited the brief perfectly (first and foremost) but also offered amazing bang for the (zero) bucks. I’ve listed some of the best features below.

Tumblr is by no means the best platform in all circumstances but it has some good plus points especially if you want to keep things simple and spend hardly any dosh. 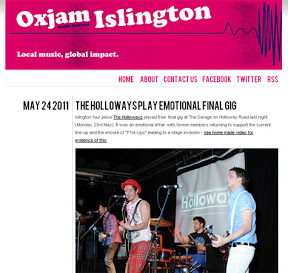 The site I’ve put together is for Oxjam Islington Takeover (image above) which is a music festival taking place on the 22nd October. It’s part of Oxjam a nationwide series of music events to raise money for Oxfam. I’m volunteering to help with marketing. Along with the website I’ve also kicked off the Facebook and Twitter pages.

There will be more to come before the event too…