The Great Swim series is a bunch of open water swims that happen around the country every year. The blue ribbon round is at Lake Windermere in the Lake District National Park.

I went for the 1 mile distance although there is a 3 mile option. The course was a simple out-and-back affair along the edge of the lake. This is a massive event. There were around 300 per wave running in half hour slots starting early Friday and finishing late on Sunday. I had a 3 pm start on Saturday which meant I got some extra shut eye – normally I’m getting up when it’s still dark to do these things. 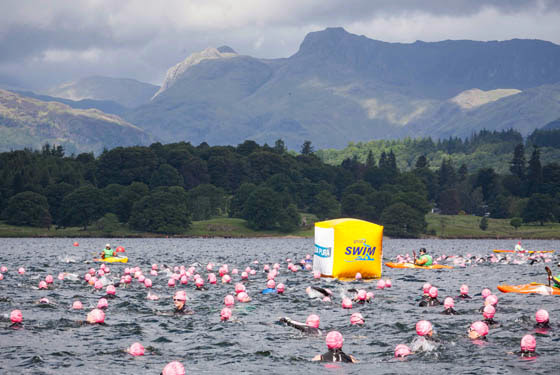 My brother lives nearby and was delighted when my sister-in-law Sue joined me on the swim, raising a stack of cash for charity in the process. It was great to have a bit of support and it made it more lots more fun having Sue there doing it with me.

The conditions were the worst I’ve ever faced in an open water swim – even including some pretty tough sea swims I’ve done. The lake was extremely choppy with waves coming from one side (from my left on the way out and right on the way back) and passing well over my head. This made sighting extremely difficult as when I would have a look at what was in front of me all I could see was these large waves and not much else. The course was well marked but it was still tough to spot a 3 metre high inflatable. 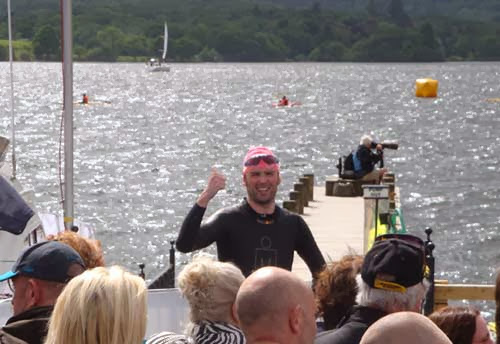 On the way back there were plenty of people from the previous wave struggling – they were probably looking at finish times in the 80 minutes plus category – a pretty tough baptism for a newbie.

I completed the mile swim in 00:50:33. I normally average around 40 minutes or so for this sort of distance so I think that shows how hard things were. I would love to have another go at this event but maybe not the 3 mile distance just yet!