I decided I would have another crack at this race which was what first inspired me to have a go at Triathlon way back in 2005. I also came back and had another go in 2006 but hadn’t been back since mainly as I wanted to try out some of other races.

This is the biggest triathlon in the world with over 12,000 people taking part. This can be good and bad. The good is that it’s local, well known, organised and supported. The bad is it feels a bit like a soulless production line as there are so many people. 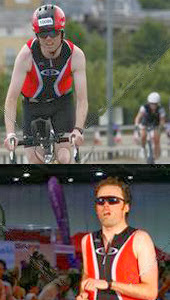 The swim went pretty well in that I dipped under 40 minutes (pretty good by my standards). It suited me as there was a lot of traffic nearly the whole distance so I had to really fight just to stay in position. Normally I get left behind after the first few hundred metres so this was a refreshing change. The battling kept me focused as my mind tends to drift when you have your head submerged for nearly 40 minutes and can’t really see or hear too much.

The bike leg was very similar to the first time I raced here in 2005. It was two loops on a fairly flat and fast course. At times you can get up to such speeds that you feel you’re running out of big gears. I decided not to hang about or cheat by drafting – there were people doing both. Going through the Limehouse Link Tunnel at top whack is quite exhilarating and even better if you can dodge all the debris on the road!

The run was four laps of a loop running out of ExCel to the north and back. This is different from when I had last raced here when it was two loops running around the outside of the dock. It was very windy and seemed to go on forever but I got there in the end. I was definitely running out of steam so I was just happy to cross the line in one piece.

Overall I was very happy as I’ve made an improvement with swim, bike and overall times – 5 minutes better than my 2006 finish time which is very satisfying especially as I train a lot less these days. I think this a great beginner’s course as it’s fast and not too challenging. I’m sure I will be back but probably not next year as I’d like to check out a few other events.