I took part in this event as a last minute entry as another aquathlon I was entered in over in east London was cancelled at the last minute. Windrush Aquathlon had been sold out but I thought I would try my luck and see if there were any places on the day.

This was a 500m swim in Brockwell Lido and a 5km run around Brockwell Park – not the parkrun course I’m told.

It was a very hot morning, almost too hot for wetsuits. I really wanted to use mine as preparation for Leeds Castle triathlon next weekend. I think it was borderline and I would have felt a bit like a Boil in the Bag cod if the swim was a bit longer. 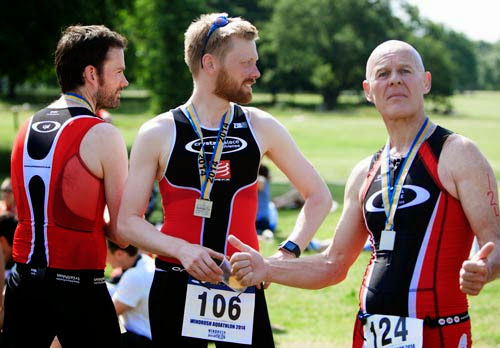 CPT mopped some of the podium places and a lot of points for the London League.

It wasn’t my fastest effort and I was a bit puzzled as I seemed very slow over the run especially. Hopefully everything will be fine next week on ‘home turf’ at Leeds Castle.