I’d been building up to the swimming marathon Bridge to Bridge ever since I barely completed Swimathon back in April. I’d even worked out that the 14.1 km is equivalent to 564 lengths of a 25 metre pool.

The weather in Henley-on-Thames was sunny and warn and the water a balmy 17 degrees when I arrived at the Leander Club for the start. I was in the slowest green hatted wave setting off at 8am. 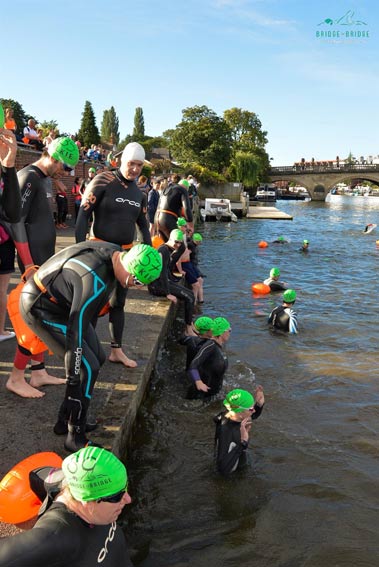 The start was a bit stressful. There were three pace groups and I decided to go in the slowest group which was planning to average 22 minute kilometres. I had no idea if that was the right pace for me and even thought it might be a bit quick over the full distance but thought I would give it a go. A lot of people seemed quite nervous as there was the usual mix of awkward jokes (my method) and talking a bit too loud which are obvious signs of the fear factor.

Everyone started off like the clappers or so it seemed but there were quite a few people together in the group so it was hard to know if I was at the front or the back.

I was regretting not buying a tow float as this would have allowed me to swim on my own. Its main function is to make you more visible so you get squashed by boats and the organisers are more relaxed about you swimming solo if you have one. I was worried if I dropped back on my own without one they might ask me to stop.

This was the longest leg of the swim so I knew it would be hard. It seemed to take a long time but I got to the lock in 1 hour 20 minutes which judging by recent swims is quite fast by my standards. 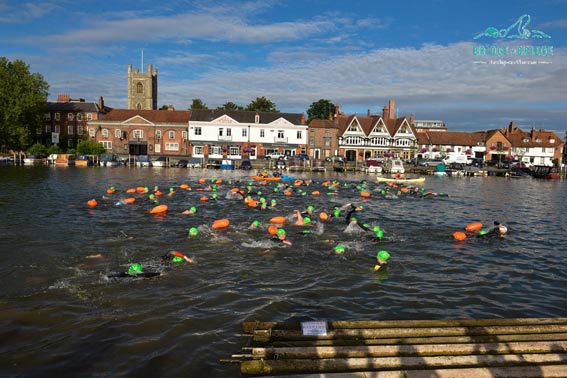 The start of the green wave at 8am

Getting out at the lock there was some sports drinks, bananas and malt loaf to nibble on before walking to the other side of the lock and starting again.

It turns out that some of the pace group were slightly behind me so I decided to start off ahead of them so if I dropped back I wouldn’t be on my own. During this leg a lot of blue hatted medium wave of swimmer passed me – they would have started half an hour behind me!

I had more space over this 3 km stretch and enjoyed it a lot more. There was a lot of dodgy sighting going on at the start with lots of people crossing over my path but now I had more space and started to relax and get in to a rhythm. I was definitely slower than the first leg here and got to the lock at the same time as the pace group who had caught up.

By Medmenham I was only half distance but I was trying not to think about it that much. I found this the hardest of all the legs as I was starting to feel a bit tired but also this had been the third long leg in a row and a lot of time to have your head under the water. I seemed to be a bit more on my own for parts of this leg but there were enough people around to follow so I couldn’t get lost.

It felt good to make it to Hurley Lock as I knew by now that the longest legs were all out of the way and I had 10 km in the bag with only 4 km to go. 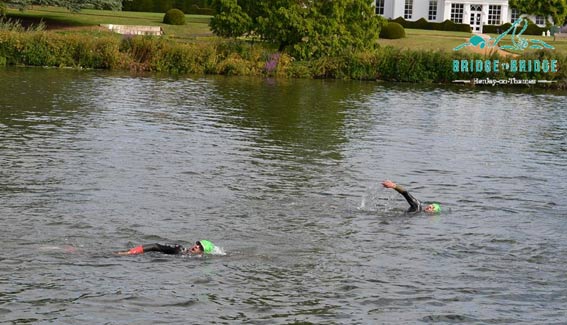 Me on the left

This leg was probably the most fun. We had to negotiate the lock by swimming across part of the river on to a small island, walking through some woods and then getting back in the river on the other side. We then swam this leg hugging the bank to our left with boats tied up on the shore and some of their inhabitants looking down at us in bemusement. There were boats passing to the right of us creating a fair bit of wash but luckily our friendly kayaks were stopping them from running us over.

I enjoyed this leg as the pace group stayed together the most. Everyone seemed to be tired and so I wasn’t getting left behind and we started and finished the leg in a chain gang.

While refuelling at the last stop our pacer commented “This next one is the worst leg”. Having swim 11.8 km and having only 2.3 km to go I certainly didn’t understand why. It seems this was because the river is quite wide and featureless on the way in to Marlow and tends to make it drag.

It felt a lot longer than 2.3 km and I never thought I would see Marlow Bridge. Every time I thought the bridge would be round the next bend it wasn’t. Eventually I saw it and reached the rowing club where I could finally get out of the water.

I was pretty pleased with myself at the finish with a time of 05:38:52. Considering how long it was taking me to swim 5 km just a few months ago this represents quite a bit of progress.

I would estimate the five food stops were between 15-25 minutes which could be taken off this. The smarter man would have timed the stops to get a more accurate time.

This was a fabulous event though which I really enjoyed and I hope I can do it again if I manage to improve my swimming a bit more. I was 02:35:08 behind 1st place so if I do this event again I want to get at least an hour off this finish time.

Thanks a lot to those people who came to cheer me on in Marlow and everyone who sponsored me.

Posts by other people about this