One of the buzz-concepts that people love to throw around is being ‘user-first’ or ‘user-centered’. Amazon CEO Jeff Bezos says Amazon are ‘customer obsessed’ as well as some other classic stuff about ‘delighting the customer’.

“User-centered design tries to optimize the product around how users can, want, or need to use the product, rather than forcing the users to change their behaviour to accommodate the product.”
Wikipedia

Anyway, you get the picture here – you really need to figure out what your customers want and need (and give it to them) to be successful, and this shouldn’t be at the expense of your own internal company squabbles and wants. The users must come first.

It’s an idea with plenty of merits but perhaps an over simplistic absolute shoved down the PR newspipe –  the overall picture is a bit more complex and requires more consideration. 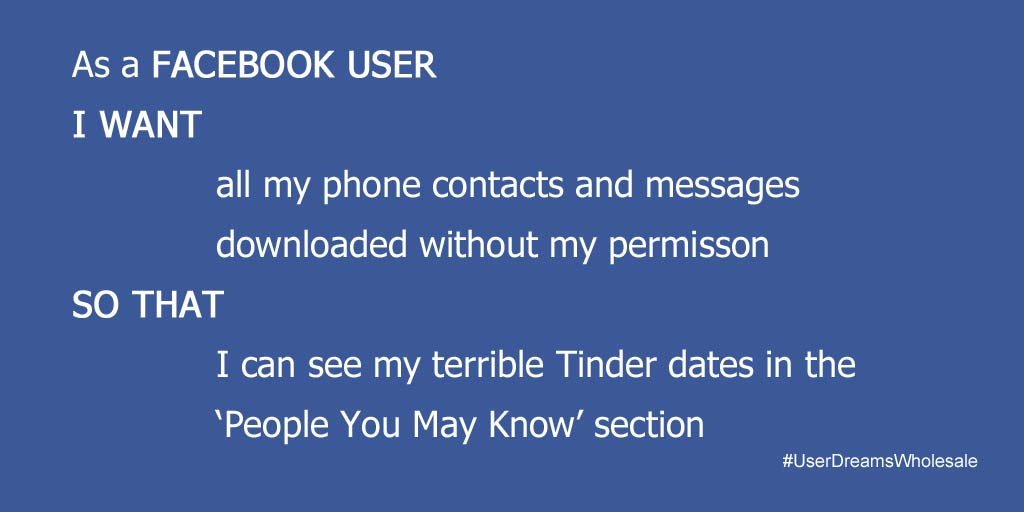 Internal emails leaked by UK Parliament found that Facebook used its Android app update to suck contacts and messages from phone owners without their knowledge or consent.

If you really are user-centered did you ask your customers if they mind being submitted to third-party tracking just for visiting your site?

Did any of your users during your research mention wanting to have to accept a bunch of trackers just to read on your site as one of their top tasks?

Did they tell you the favourite feature of your website was the benevolent advertising gif from that brand website they were on yesterday?

Would your users be happy knowing that you’re profiting from this tracking? Are be happy to profit from that surveillance?

You could argue that cookies to facilitate logins and other site features are reasonable and necessary. You might also say analytics software is important to allow the website to be improved (although I don’t consider the Google Analytics monopoly of web analytics as a good thing – other less suspicious products are available).

Beyond those are an array of AdTech surveillance capitalism trackers designed to follow you around and understand your behaviour. Chief among these are the big tech firms Facebook ad, Google ad and Amazon ad trackers. These support the big tech advertising platforms, recording and profiling you even if you don’t have accounts. As well as those are other SaaS (surveillance as a service) companies who people pimp their site users to build their own advertising tracking databases.

What’s annoying especially post GDPR, is the number of websites who will force you to agree to all trackers essential and predatory alike, often using dark UX patterns to confuse people into compliance. Not very user-first. 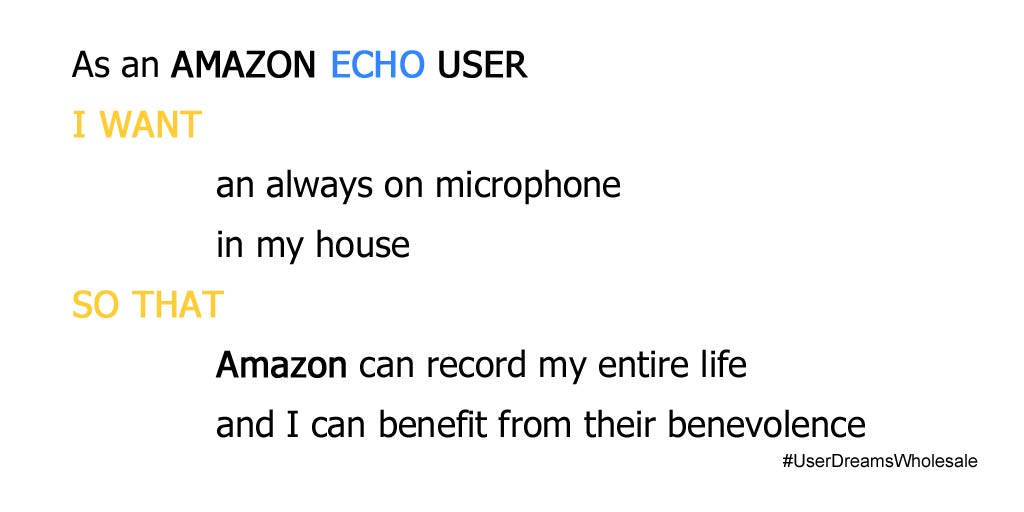 Alexa is an Orwellian privacy Death Star – promises that they aren’t listening or recording now or in the future, can’t be taken seriously.

Why Amazon, Alexa and #TechForGood can’t be in the same sentence

Some people seem quite happy to contribute to a network of home wiretaps (like the privacy Death Star Alexa from Amazon) or suggest customers, who they apparently care about, check out their Facebook page, where they can be subject to fake news, data theft or Zuckerborg ad bombardment. 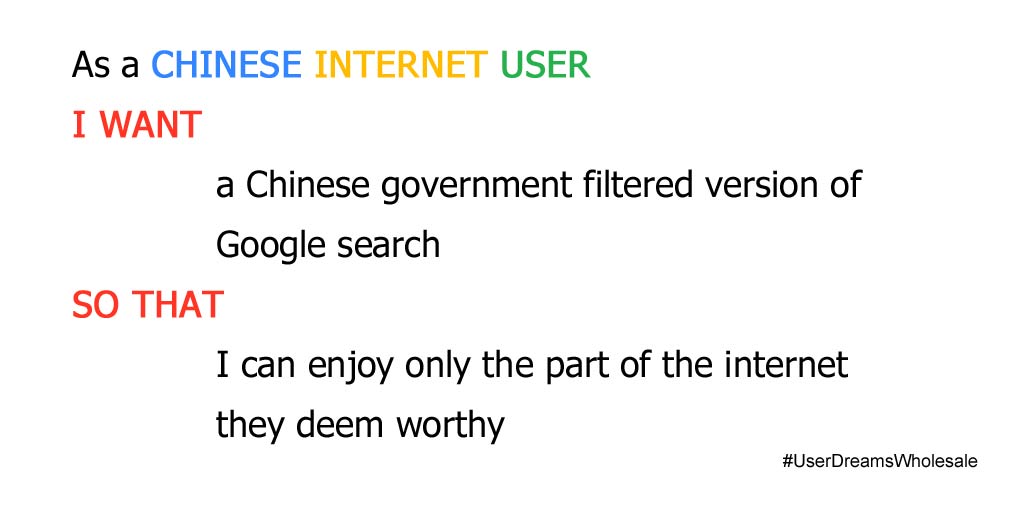 Amnesty International condemned the secret Google project to build a Government censored search for China – something they had promised they would never do.

A quick scan through the excellent Exodus Privacy project shows just how many reasonably innocuous apps have third-party trackers built in pumping information about you off to all sorts of difficult to identify sources. The popular Trainline app has 12 trackers. I had this installed over other similar apps as it seemed to be the easiest to use to find out train times. I didn’t know there were so many trackers so I’ve now binned it off. 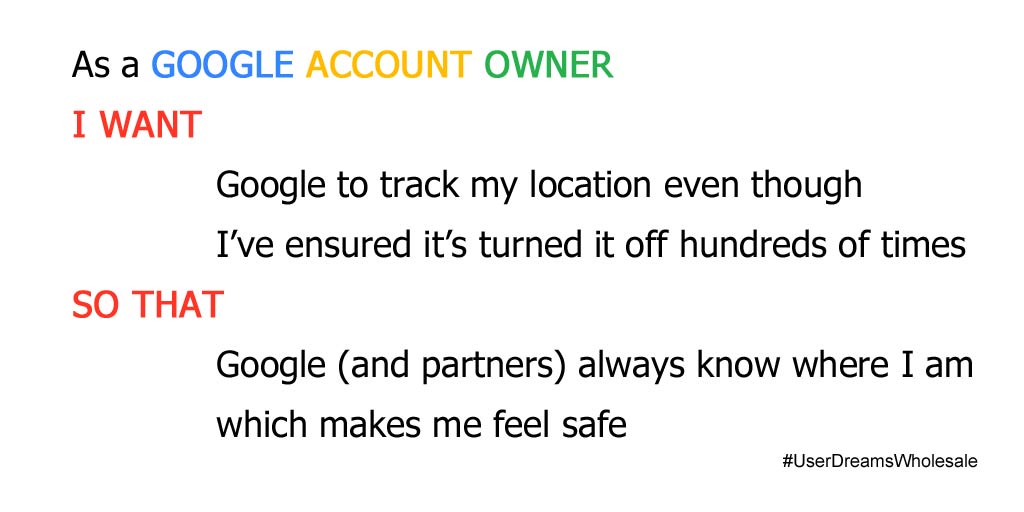 An AP investigation found that even if you turned off location history Google still tracks your movements – something they denied.

AP Exclusive: Google tracks your movements, like it or not
(AP news)

As an internet user myself it goes without saying that I would prefer to avoid surveillance, and I’m taking steps to minimise being tracked as I go about my day.

It’s clear that the big tech monopolies are all over this with recent revelations from Facebook, Google and Amazon that they will surveil you with or without your permission.

To accompany this post, I’ve intermingled a series of user stories based on requirements that nobody would ever ask for but that exist showing that even the #BenevolentTechOverlords, the ones we are always told to emulate in our pursuit of online excellence, will gladly chuck their users under the bus in their own pursuit of profit. The users are often not the customers but the product. 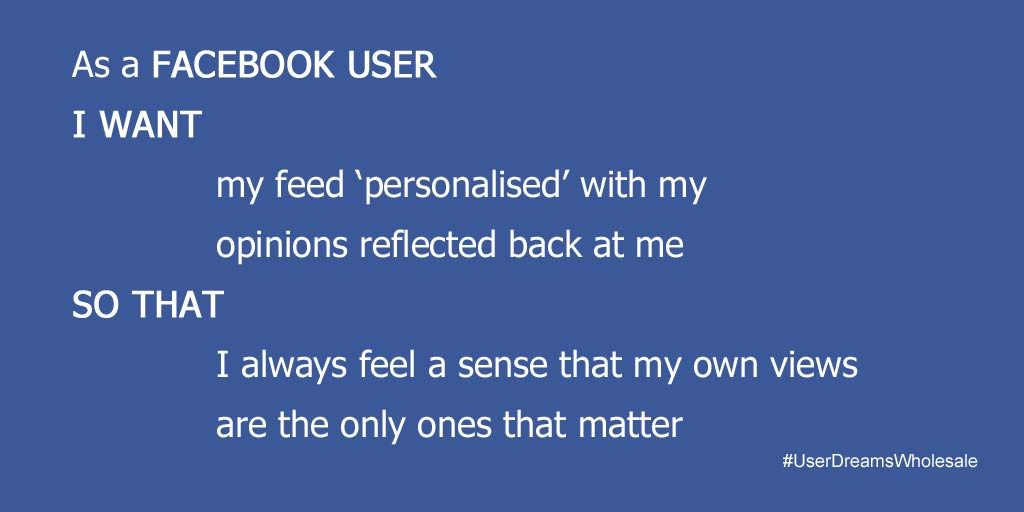 How to Fix Facebook—Before It Fixes Us
(Washington Monthly)

It’s a bit of fun to try and make a serious point.

I’ve called these user stories #UserDreamsWholesale as these are not the sort of things people dream Silicon Valley would build for them. The wholesale comes from what Shoshana Zuboff calls Surveillance Capitalism, a belief that the more data about people which can be extracted through surveillance lead directly to an accumulation of power and money. Thanks to the likes of Google, Facebook, Amazon and Apple (#GAFA) this is now the dominant narrative of the internet.